Week 2 of teacher training ended with a Saturday morning class that was not an ideal temperature but we made it through anyway. It is a good lesson for when we get out in the "real" world, heating systems don't always work and you still need to get the students through the class. After class we did our regular errands; laundry and "grub" shopping. Yoga Jane came with us to the laundry mat and to Trader Joe's. She was a trooper, never once did she complain! We had a side excursion to Walmart to get a "well talked about", "Highly sought after", "Rarely imitated" wooden bowl. 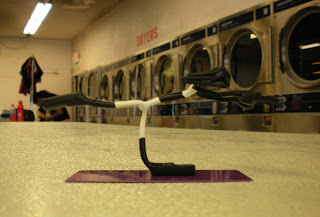 Yoga Jane at the Laundry Mat, in balancing stick, waiting for the clothes to dry.
The infamous wooden bowl:
Simon, Mark's roommate has a friend here that got a wooden bowl here in Las Vegas. He apparently has wantend once since he saw it week one. So we are at Trader Joes and he wanted to go to Walmart to get one of these wooden bowls. None of use knew where a Walmart was so we all tried to convince him of other options; using a plastic bowl, getting a different wooden bowl, buying a wooden bowl on Amazon and having it shipped to him, anything but going to Walmart. We even told him Walmart couldn't possible have a great wooden bowl, it is such a cheap place to buy stuff, he probably would like a wooden bowl from, say, Whole Foods, or Whole Earth Provision more than one from Walmart but no, he was set on getting THIS bowl from Walmart. (They don't have Walmart in New Zealand so I think part of it was the fascination with Walmart.)
We are all standing around discussing how we don't know where a Walmart is and Simon walks off to ask someone at Trader Joes's. He comes back with a minute or two and cheerfully announces there is a Walmart almost across the street from us. So, we go. While on the short ride to Walmart, Simon goes on and one about the bowl and how great it is. I was laughing so hard, it sounded like a magical bowl...I told him if it was THAT great, I needed one too!
Here is the bowl: 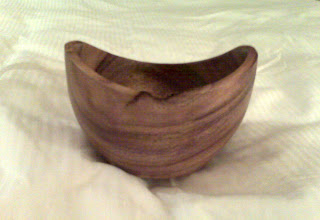 It IS a pretty awesome bowl, and CHEAP! It was only $5 at Walmart! It is part of the Canopy Collection, made from Natural Acacia Wood. We bought the last two at Walmart, I think everyone from training went and got one! 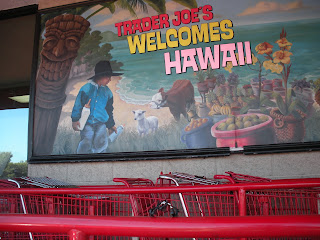 Yoga Jane, at Trader Joe's. Can you see her? 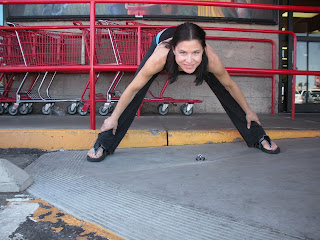 Lara and Yoga Jane in Standing Separate Leg Stretching at Trader Joe's.
After our errands we decided to go "somewhere quite" (AKA Starbucks) and study our dialog. Right as we got there and sat down outside, a demonstration march started down Sahara! So much for a quite place to study! 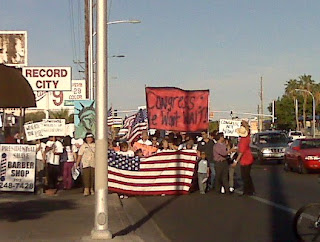 Immigration For America Demonstration March Outside of Starbucks.
Posted by BikeRunYoga at 1:38 AM