I won a trophy at the Summer Bath 5K run at White Rock Lake! 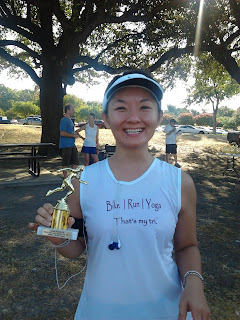 Toda's run was great! Weather in Dallas has been over 100 for more than 30 days but the start of the 5k was early so the temperature was nice. The start was a little weird, we had D tags but there was no start strip to run across. We debated inching our way to the front but as we were contemplating it, the race started, and we were off and running.

Some were running, I was mostly jogging. Is there a difference? Apparently yes. I looked it up. According to this website, jogging is more leisurely and less impact to the joints. Running is defined as a pace that means you run a mile in less than 8 minutes. Are you serious?! I have friends that run that fast. I tried it one time on a treadmill. I looked like those cartoon characters that have a million legs drawn. Maintaining that pace would be a joke. I might have to change the name of this blog to Bike Jog Yoga.

This race I jogged for sure. Good news is I jogged the entire time and didn't stop, even to get a drink of water. Nearly choked myself to death drinking and jogging but I didn't walk!

I felt my pace was good, as I was running I  felt pleased with myself for going to yoga 5-6 times a week for the last few weeks. It really seemed to help my breathing and my ability to stay calm and continue to run rather than having to walk. I never felt my heart rate jump up where I felt overwhelmed. Even the hot temperatures didn't bother me.

My overall time was pretty average for me, 36:21 according to my watch, 11:41 pace. Definitely a jogging pace!

The friends I was with run much faster than me (and they really run) and they almost always win an award at the 5K races we run. So we waited for the award announcements and I took pictures of everyone getting their award. Then I hear the announcer say something about a winner in my age group at 39 minutes and something seconds. I thought to myself, wow, I was faster than that, am I getting one too? And just as I finished that thought, he announced my name! Can you believe it?! I got a trophy! I was so shocked.

I've never won an award at a race before. Definitely something to blog about and scrapbook. I am going to find a prominent place in my house for the trophy.