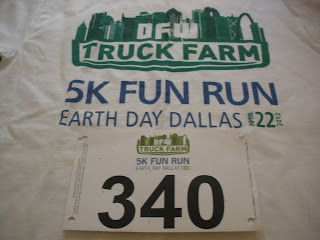 Although the DFW Farm Truck 5K was fun, I'm not sure it was really a 5K. I finished at about 29 minutes and I stopped at all four stations. I heard one person after the race say they thought there was about a half a mile left, which would make more sense, another half mile might have put me more at 34 - 34:30. Either way, it was a fun run and marks the completion of event 5 of 12, just 7 more to go in my Bike Run Yoga Challenge.

Before we started the run they wanted us to back up so the camera crew could get us all in the shot; they were planning on doing a live start for channel 5. A live start is fine but why do we have to back up past the start line? Can't the cameras move up? Seemed a little strange, others thought so too, I heard a few rumblings about the silliness.

I was  a little concerned about running today because I did a Nike Training Club workout yesterday which consisted mostly of leg exercises and my quads were so tight, I could barely walk today, I wasn't completely sure I could lift my legs for and entire 5k! I started off slow, I could feel my muscles revolting but an amazing thing happens when you set your mind to something...the body tends to respond. My legs moved and I kept breathing.

At the first farm station we picked up a plastic egg and scooped up some dirt. At the second station we pulled seeds out of pods and stuck them in the dirt. Even though these weren't the stations they described in the initial information about the race it was still fun and I left with something that will hopefully grow into a beautiful flower!

At station three we got water, for the plant....this is about 20 minutes in. I was thinking, where is my water? The plant gets water first? Then I see ahead a water station. All smiles.

Station four was pollinating a fake flower with a fake bug and getting a sticker for the egg, which I wrapped around the egg to keep it closed.

And then the finish!

I can't wait to plant my race bib and find out what great things sprout. My egg is proudly sitting on the windowsill.

The best part of the race? Kids.

Along the course I see a father and his son, the son is off to the side and the dad says to the son, "just walk". The son takes off running and tells his dad he has to run, that is how he gets power and water.

Posted by BikeRunYoga at 1:25 PM 2 comments:

A leg workout (that kicks your butt) is not a good idea the day before a running event.

Today is the DFW Farm Truck 5K at Fair Park. I was excited to be in the run....then I got up this morning to legs that won't move, thanks to the Nike Training Club workout yesterday! My quads are so shot, I can barely walk, it looks more like a shuffle than a walk.  This 5K should be interesting.

Also wishing I had bought the long sleeved running shirt I saw at Luke's Locker when I picked up my packet. I'm wearing a bra top, tank top, arm warmers and a jacket...and compression pants. This runnner likes it HOT... me no likey 50 degee weather.

Cold aside, it looks to be a good day for a run... Check back for post race news!

Posted by BikeRunYoga at 7:22 AM No comments:

Have you tried the Nike Training Club? 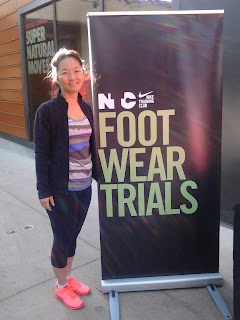 Today I decided to try a workout of the Nike Training Club (NTC). They do a free one hour workout in the grassy area in the center of Northpark Center every Saturday. My friend and fellow yogi, Melissa Galitz Villamizar, was helping lead and she invited me to come out and have some fun! 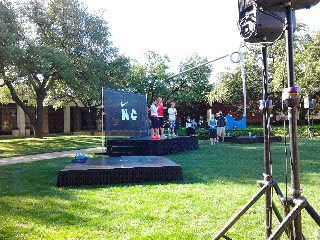 Wow, if you have never done a workout with the NTC, go try one, you are in for a good workout. We started off with line exercises where you run, skip, side step, etc down to the other end, then run it back. The entire time you are suppose to be moving your feet, even when you are just standing waiting....which you aren't doing (standing around) because people are shouting things pumping you up getting you to MOVE!

After about 15 minutes of the line work we spread out and did squats, lungs, squat AND lungs oh and some push ups which I think were because someone was standing still. It was all a little fuzzy, I had sweat running down my face; I was focused more on wiping and hydrating.

We did a little work with weights, everything we did though was stuff you could easily do without extra weights. To be honest my body weight was plenty!

After they tortured my thighs in squats and lungs it was time to wrap it up with a little more running and squatting. Oh the fun!

At the end of the hour, the best part might have been when we stretched it out...ah something I'm good at!
Today was a big launch day with cameras, loud rockin' music and a lot of awesome freebies. They had test shoes to wear during the workout, free towels, free Jamba Juice smoothies, free mini manis and free chair massages....plus I got a goodie bag full of fitness mags and other cute swag! 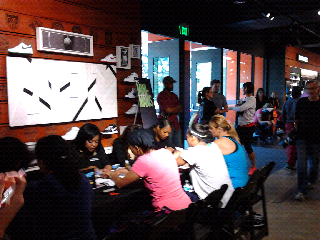 If you are looking for a great free workout option, check out the Nike Training Club on Saturdays from 9 - 10 am, you are sure to have fun, sweat and burn a ton of calories!! 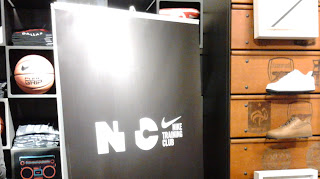 Posted by BikeRunYoga at 2:37 PM 2 comments:

My second ZWOW workout this week

My second ZWOW workout this week, and this one is tough! Aren't they all?! I only got through 2 rounds and 10 Santana Pushups. I was surprised; I was able to do the pushups much better than even a week ago. I'm still no superstar but at least I was able to stay on my toes! (I know, you can't really do these type of pushups on your knees...I can't really do pushups at all though so being able to do these and with decent form was a win.)

I also did her challenge of 15 Pistols on each leg. Monday I did these in her workout and didn't have a clue what I was doing or if I was even accomplishing anything. Then, on Tuesday I could barely lift my leg without my ass hurting. Ass hurting = glutes working = smaller butt (hopefully) = size 4 jeans (eventually)!

Video explaining how to do a Pistol

I love it, she got a crate and used it to sit on and then explains how to get back up. Perfect...a prop! I think this is it, I can do that, how hard can it be, she is sitting and then coming back up. So I get a step stool and try it. No way is a step stool even CLOSE to tall enough. So I grab a footstool. Uh, no. I look around my craft room and find my scrapbooking crate (it's on the right). Now one might think this was too tall, that it is too easy with something so high, you would be wrong. It might be too tall for some people but seriously folks, these things are hard, I was even having a hard time lifting up from the stupid crate after 15 on each leg. I'm going to keep working on it and someday hope to get to the white step stool. I am guessing if I can do Pistols with the white step stool, or even without it...I will also be able to come out of Toe Stand without hands...also a goal. 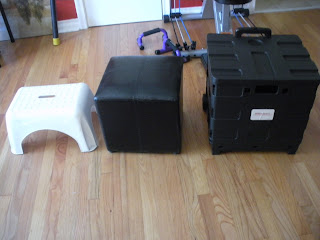 Posted by BikeRunYoga at 11:03 AM No comments:

A quick 10 minute workout to get the day started right

Just finished Zuzana Light ZWOW workout #12. I managed to keep up with her, sort of, except for at the end I didn't do as many pistols, or as well. Can anyone get that low doing a pistol? Wow. It looks easy but try it, it is harder than heck.This workout has three exercises, pistol, low jack and dynamic burpees. Seems simple till you try it!

I'm not a big "you tuber", I found out about Zuzana Light through a friend who said this lady rocked. I was skeptical about 10 minutes and videos on You Tube but this lady IS amazing! I am going to try and do these videos a couple of times a week.

I did zwow #11 last week, it too was hard, at least in that one I was able to keep up with her. Now keeping up with her is relative right? I mean, my form isn't as good as hers and I might not go as deep as her but I survived and I consider that a win.

Does anyone else do these workouts? How do you like them? Have a better video workout to recommend?

Tour Dallas 30 Miles is a Great Ride to See Dallas

Fourth year to ride in the Tour Dallas 30 mile bike ride around Dallas, always a fun ride. It was a cool morning yesterday, perfect riding weather. I haven't spent a lot of time on the bike this year, 30 miles and a leisure pace was a good way to get back in the saddle. 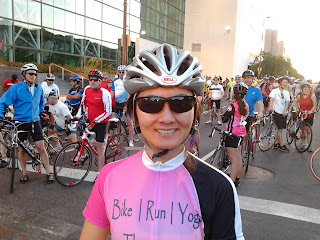 I am pretty sure it was the same route as last year but I have to say, the hills seemed much larger this year, probably due to the lack of riding I've been doing. Or it could be because I decided to do an online workout (I'll post about that later) yoga and work in the yard for two days and my  legs and arms were shot before I started. My quads felt like I had been 80 miles and my knee started to hurt about mile 23-24 which I thought was just silly so I pushed through.

As I rode along I thought back to when I purchased my bike and how I thought 30 miles was a LONG distance! My friend and I had signed up for the Tour Italy 30 miles and actually "trained" so we could ride that far. Now 30 miles is an easy ride around White Rock Lake a couple of times. This thought made the last miles not so bad.

Hoping to get on the bike more this year, tossing around the idea of doing the Hotter N Hell again this year. We'll see. This event makes four in my Bike Run Yoga Challenge of 12 events in 2012. Maybe I can get one more in before the month ends.

What rides or runs are you looking forward to?

Posted by BikeRunYoga at 7:33 PM No comments: