Wait and Monument Cafe was less boring with the ability to walk through the garden and market. Mom and dad bought locally made honey, popcorn and waffle mix. If you're in Georgetown, Texas, go by and check it out! 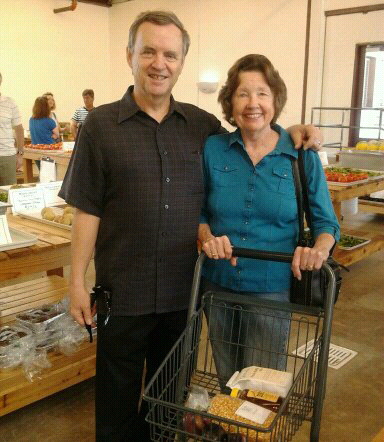 Posted by BikeRunYoga at 11:15 AM No comments:

We Lit Up Plano at the Firefly Run

Firefly 5K in Plano yesterday was a bit of a cluster. I found out about the event the last day of registration and was only able to pick up my packet on race day. So there I am at home, piddling around trying to decide when to leave to travel ALL THE WAY to Plano, which is practically a day trip for me. (I stick close to home.) I get there with almost an hour and a half  before the race starts. I find parking, walk over and see the "Packet Pick Up" tents. But wait, there is a line....instead of walking to the right, where the tents are, I walk to the left to get to the end of the line. And I keep walking and walking and walking. The line is wrapped AROUND the circle parking lot. So now I am at, say 6 o'clock and the tents are at 10 o'clock.

About 40 minutes in we get up to the front and there is a single lady with a list of names, we have to get our bib number from her then get our packet. A cluster.


Race started like a typical race, a mob of people trying to run and really only able to lift their legs up as IF to run but mostly just standing in place because the baby stroller person and determined walker are right in front. The mob of people lasted almost the entire run.

Before I had even made it to the half mile point there were runners coming back down the street, a police officer on a motorcycle was shouting to stay to the right, squeezing the mob even closer together. My first thought was wholly crap, is the front runner almost done before I get to the half mile point? I immediately felt inadequate. Then I realized there was a turn around in the middle of the street, we had only gone about 3/4 of a mile.

The course was interesting, two u-turns and one water station. I heard there was no water at the same station when the 10K people wrapped back around the course, that sucks even more. With the humidity and heat, plus it being a "family" event, I would have thought more water stations would be available. Granted in a 5k for someone that runs them a lot, one is probably sufficient and if you are well hydrated maybe you don't need any water, but this was a hot humid night, lots of sweating...and by the looks of the results, many people were either not seasoned 5k runners or they were walkers, all that probably could have used more water.

Then at the end they had a NARROW finish line and no one was moving. So I crossed and got immediately stuck in a mob of people that were not or couldn't more forward. Another cluster. I usually sprint to the end so when I am done, I need room to breathe...and I need some stinkin water. Neither was available. Instant panic and an extreme out of control need to get away from everyone over came me. As gently as I could, I pushed people out of my way as fast as I could and ran to a part of the parking area that had no one. Air! Breathe...


I walked around to catch my breath and cool down. I eventually found water. Apparently there was a line for water, I couldn't see it, all I saw was a mob of people. There was a lady trying to give people water but no one was paying attention to her. She mumbled under her breathe, "fine, you can wait in line then." Water? No line? Sure...I'll take some of that. She seemed only mildly pleased I took her water.


I was disappointed in myself after the run, I walked way more than I wanted or should have. I was scolding myself a little over not having run more days before the race. And my overall cardio ability seems to have deteriorated. I realize running in the heat and humidity is different but I feel like my yoga should have helped me manage my breathe and mind better. Plus, I'm still having the same hip issue from when I ran the Dallas Rock n Roll half with no training. Even a 5k makes it pop, not a good sign.

Today though I am a little more pleased. I finished in 36:21 which is a decent pace for me. It isn't my best time but certainly not my worst. I finished 122nd in my age group, out of 277 so I was in the upper half, which I consider doing well. It is a far cry from 3rd in an age group which three of the other people I was with accomplished but they run more and are way more dedicated to their time than I am. I finished. I didn't die. I got the t-shirt. Enough said.

Overall, I would rate this race as a 1 or 2 on a scale of 1 to 10. Probably won't do it again. But nothing personal, there are plenty of races I only do once. Best thing was the armbands they gave us that light up, they blink or stay on all the time. I think my nieces will love these.

It looks like it was only the second year in Dallas and the first year was very small so probably in a few years they will have worked out the kinks and a better experience will be had by runners and volunteers.
Posted by BikeRunYoga at 11:19 AM No comments: