Running hard on your knees? Probably...but if you love it, what are you going to do? Go to your nearest Bikram Yoga studio and get your yoga groove on! Your knees will thank you!

These are funny. I love social networking but I'm not sure I would wear shoes promoting them. Bu then, I wear other items brand names on them and it doesn't bother me. And what about all the special items for breast cancer research and support? Everyone wants to wear something pink with a little ribbon right? So why not have shoes with facebook adn twitter on them?

I am sure these will be out before you know it.

read more...Would You Buy These Facebook and Twitter Running Shoes?:
Posted by BikeRunYoga at 2:04 PM No comments:

Hot Yoga Origin is Traced Back to Bikram Yoga

I love how the basic principals of hot yoga are exactly what Bikram Yoga is all about, as if there was no other hot yoga! Yea Bikram Yoga!

The basic principle behind this is that this type of yoga, is that the heat pushes the muscles to work harder and therefore, achieve better results. “Essentially, hot yoga comprises a 90-minute long workout with about 26 asanas and some pranayama techniques,” shares Chandrakant, a yoga practitioner who trains TV artistes in Mumbai. “These asanas include a whole range of bends, twists, turns and even sitting postures that help to increase flexibility and add balance to one’s body,” he adds.


My last running event was on October 23rd when I ran the Walk Wag Run 5; I wasn't expecting this run to go that well. One run every month doesn't bode well for good running times. But I surprised even myself with my lightening speed and energy. With more than 18,900 other runners, I ran the new 5 mile route with little to no issues and only had to walk twice. This for me is a huge success. I hardly ever run straight through and never can I remember running 5 miles without intervals. For some reason the energy of the other runners and the thought of eating mounds of turkey, stuffing and pie motivated me to run like the wind...or at least like a brisk breeze. 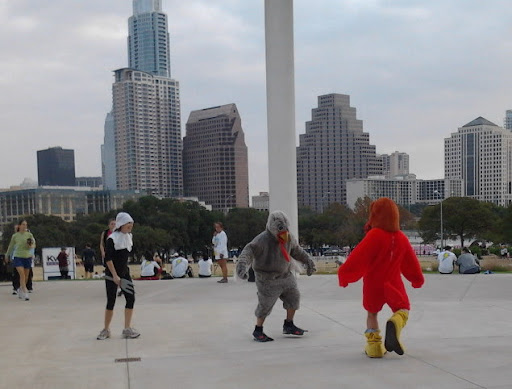 My brother and sister-in-law decided to volunteer for the event, which meant we got down to the event at 6:30 am for a 9:30 start. A bit early but when free parking is involved with the threat of 20K plus people running, getting up early seemed like a good idea. It worked out great, my bro and SIL ended up not having much to do until the race started so we watched turkeys being chased by pilgrims, encased men in body suits running amuke, grown men in turkey costumes and lots of ladies dressed as Indians. Running events seem to be a good reason to dress as one might not dress under normal circumstances. And why not right? Halloween is only one night and maybe one has more than one costume in the closet. What better time to wear that "fall inspired, turkey, Indian, Pilgram" outfit?

The first mile was frustrating, there were too many people running and worse, people were walking with dogs and strollers so it was a lot of running in place, darting between wheels and tiny feet. Why do people that walk want to get up so close? Don't they know they are going to get run over my the runners? First mile I finished about 11:42...not my best time. As I looked down at my watch and saw the time and thought about the 4 miles ahead of me I thought back to my brother and our conversation earlier when he asked me what I thought I would run. I had said then kind of joking, if I didn't run less than 12 minute miles I should just stop running. Ugh...I typically slow DOWN when I run so starting off at 11:42 didn't seem like it was putting me in a good position.

I decided then to pick up the pace and just keep running to mile 2 and see where I was at I've forgotten what I ran but the point is I was still running! Two miles without stopping. Feeling on a high!

I ran to mile 3 without stopping in 32:42 which was so amazing. The route was still packed, it was difficult to get a good steady run in, a lot of run quickly around someone, slow down to wait for someone in front of you. But I kept going, rounded the corner onto 1st street and ran over the bridge. I saw my sister-in-law and brother at the end of the bridge cheering on the runners, waved and ran to the finish line. five miles in 50:54.

My best time ever! Less than 2 years ago I hadn't run more than a 5K and running 2 miles at a 12 mile pace wore me out. Now I am running personal records. I see 9 minute something miles in my future!
Posted by BikeRunYoga at 12:29 PM 3 comments:

Why do people slurp thorugh their straws?

This post is a little late. I wrote it on the plane on my way to the Bikram Yoga Women's Retreat in Orlando, Florida. (I'll post about that later.)

On the plane headed to Orlando, Fl. for the Bikram Yoga Women's Retreat. Guy on the aisle has a cup with a straw and I swear I heard him slurp the last sip out. I'm almost sure it was him drinking the last of what was in his cup because I thought about all the times I was a young person and was told to NOT slurp the last drops through the straw. The sound can be like nails on a chalkboard. You know, that annoying sounds kids (and some adults) make when they suck into a straw and slurp up the last drops of whatever fabulous beverage was in their cup.

I was thinking of this as I heard this guy slurping through his straw.

Then- as if it was a magic cup, one that refills magically, I hear what sounds like more slurping. Really?! You have more? But you just sucked it all out of the bottom. Nope, there he goes again. Weird I think...and slightly annoying.

In the exact moment I am trying to figure out how this guy got more liquid out of his empty cup I realize the sound isn't coming from him, the sound is coming from the guy next to me sleeping. It was him snoring! It sounded just like someone slurping through a straw! LOL

My only solution? In go the earphones....

I'll post about how the women's retreat was as soon as I can....
Posted by BikeRunYoga at 3:58 PM 12 comments: