When all else fails, just roll with it. 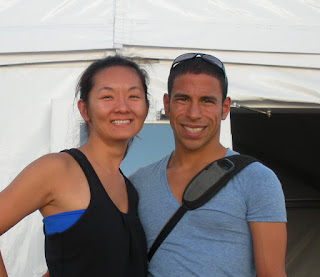 Joseph and me before yoga class
Amazing, It's already week 7 of my Bikram Yoga Training! I can't believe it, time has really flown by. I started week 6 feeling sore and my sciatica was really getting to me but after rolling my butt on the floor and on the foam roller, I managed to somewhat fix my sciatic issues. Bikram was here the first part of the week, we had lectures on fascia best of all, Joseph Encinia was here! Plus, Bikram gave us a nice surprise and gave us Monday off!

Have you ever tried to fix a problem without knowing really where the problem is? It's the hunt and peck method I think, just trying different fixes until something works. That was me with my sciatic nerve issues. Our anatomy teacher had convinced me, not because he told me specifically but because I deduced from his lectures, my sciatic nerve was pressed against a gluteus muscle and THAT was what was causing the nerve to express pain. Fine I thought, I'll foam roll my butt. Which I did, with not much success. Then on day, I think it was Monday after class, I started rolling my butt on the floor. It looks a little funny but us very effective. I could totally feel the knots in my muscles. It sounds weird but I had knots in my butt! So, I rolled around for a bit in the hot room and felt a noticeable difference in my glutes. Not much difference in my sciatic nerve. So I foam rolled more and rolled a little farther down, kind of where my "cheek" meets the back of the thigh. OH MY GOSH! Man, did THAT hurt! AH HA! Now we are talking...So I rolled around on that area for a bit and wow, I could feel the spot where I "think" I twisted something in November, when all my issues started. Long story short, I am foam rolling

every day and this is the first week I have been able to actually lock out my knees in Hands to Feet and Standing Head to Knee without pain in my glutes and leg. YEA! Love the foam roller.

Now after I fixed one part of my sciatic nerve issue, I found another. Only after sitting in lecture for hmm...4 plus hours did I find an annoying, shooting pain in the side hip area. Now because I like to self diagnose, I quickly decided I had alleviated one knotted muscle but hadn't fixed the other so now instead of pain in one area, it was now showing up on the other side. So frustrating! I squirmed around in my chair as long as I could but ultimately decided I had to get up, even if it was Bikram lecturing, I just couldn't take it anymore. I finally got up and walked around outside for a minute.

Enough about my sciatica. Who cares about that anyway? LOL Besides, Joseph Encinia was in town, that is WAY more important than my health issues. It was so exciting, I saw a guy that looked like Joseph walking down towards the tent with Dom, as I got closer I realized it WAS Joseph! It is so awesome to see people at training that are from Dallas, it brings a little bit of home to the yoga bubble. Even though Joseph hasn't been in Dallas for a few years now, we all still think of him as part of the Dallas studio.

Joseph taught one of our yoga classes, he was awesome of course. His energy and passion for Bikram Yoga and life in general radiates from him in every possible way. You can't help but be inspired to be more, try harder, give more. Joseph was the first person in Dallas to suggest I should come to teacher training, even before he was a teacher himself. I didn't believe then that I could possible do this training. To have him here watching me go through training is one of the greatest feelings.

Bikram also had Joseph come up and demonstrate his winning competition routine, in jeans no less! Here are some of his postures. 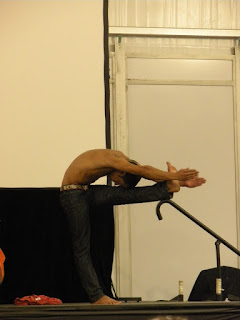 Standing Head to Knee, no hands 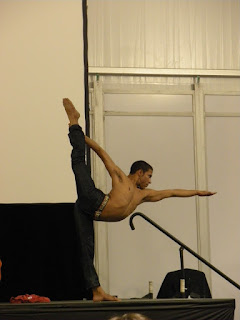 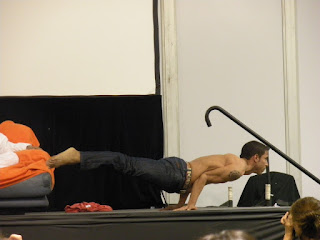 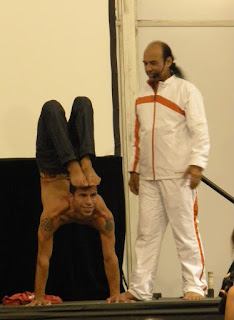 He left today for India, he going to teaching for Bikram at a studio in Mumbai. I was tearing up as I gave him one last hug today before class.
Posted by BikeRunYoga at 12:10 AM