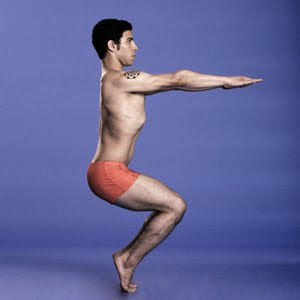 When I tell people I practice yoga as part of my athletic regime, some people look at me funny, they think yoga is easy and not a workout – those people have never practiced Bikram Yoga. Bikram Yoga is SUCH a workout! I know it is because I practice 4-5 times a week and after each 90 minute class, I am drenched. Actually it doesn’t need to be the end of class, heck, before the first water break I am soaked! It is a cardio workout and a strength workout all in one.

Awkward pose is the second pose of the series, it is done really in three parts and each has its own difficulty level and to me, doing it twice just adds to the challenge. Keep in mind, at this point in the class, there has only been one breathing exercise and really only two other postures. Even so, most of the time, my posture has slumped a bit and I have to remember to stand up straight. So I stand up straight, space my feet 6 inches apart and extend my arms straight out, elbows locked. The first part of the pose requires the arms to be extended and then you basically sit down as if you were in a chair. This part of the pose always makes me think of girls going to the bathroom in public places when they “hover.” This pose is good practice for that!

The second part of the pose requires the same basic movement while balanced on the toes, very hard! When I first started practicing, I could barely sit down at all. There is a burning sensation that happens in the thighs that makes the legs shake, I think the instructors secretly like this. After practicing for about 4 years, I am now able to sit more into the posture but no where near as close as Joseph Encina, the yogi in the photo and the 2009 US Yoga Champion.

The last part of the posture is done with the knees together, sitting all the way down, still with the arms extended out so your legs and arms are parallel. This in itself may not seem difficult but after doing the first two parts of the posture this is extremely difficult. Probably the most difficult part is getting up! Getting up means rising slowing and as straight up as possible, like your back is against a wall. Ah, and just when you feel you are done, well, now it is time to do it again!

I have grown to love this pose a little more since I took up biking and running. Biking and running tend to make my muscles tight and my body out of alignment. Awkward pose helps in biking and running because it helps with flexibility of the hips, relieves joint and muscular pain and increases circulation to the knees and ankles. If I have been biking or running and feel stiff, taking Bikram Yoga really helps bring everything back the flexibility.

Come try Bikram Yoga for yourself and see how it can help you. September is Yoga Month and many studios are offering a free week of yoga. Check the Yoga Month website for a free week coupon.  Or several studios are offering a free day of yoga on September 7th.  If you are in the Dallas, Texas area, please come to the Bikram Yoga Dallas studio on the 7th.  I will be there taking class, come by and say hi!
Photo courtesy of Bikram Yoga Dallas
Posted by BikeRunYoga at 12:53 AM