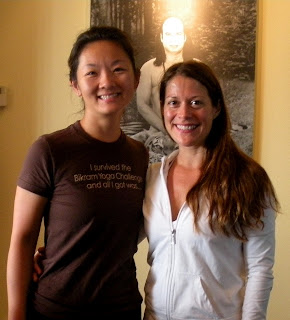 Karen and me before class, Bikram is in the back!

I just finished Bikram Yoga with 58 other people at Bikram Yoga Dallas as part of
Free Yoga Day in the Dallas/FTW area.
I got to the studio early to make sure I got a good spot, I suspected today was going to be busy but I had no idea the room would be SO packed. I was debating where to put my map when Sherri, one of the instructors was getting up from taking the earlier class and commented to me that seasoned yogi's should be on the front row. "Come on Carolyn, come up to the front row," she says to me. Sure I think, does that mean I am a seasoned yogi? But I haven't been practicing because I have been training for a marathon and century ride. What if I can't do all the poses? Goodness gracious, a million negative thoughts went through my mind in a millisecond. After that had passed, I cheerfully moved my mat to the front row.

One thing that happens when there are new students, and a lot of them, they tend to not know what to do and place there mat in a place where they can't see themselves. I noticed this and the increased number of people that were coming in so I helped a few people move their mats so they could see better. Plus, since so many people were coming in, we all had to squish together more to get everyone to fit.

Ok, so class hasn't started yet and I am already drenched in sweat! Great I think, today is going to be a big water day. I got get another bottle of water, just to be safe. And yea, Karen is teaching class. Karen is one of the owners, along with her husband, David, of Bikram Yoga Dallas and she is an awesome teacher. We start the class with a brief overview for the new yogi's and of course, the statement of staying in the room is the only goal gets a little chuckle. But that is true for new yogi's, staying in the room is all you need to do for the first class. Getting use to the heat and humidity can be very difficult and many people can't clear their minds and let go enough to stay in the room.

We lost three girls at the first water break after "eagle pose". I think everyone else stayed in the room. There were 59 yogi's all doing the same postures and giving 100%, it was quite amazing. And even with all the heat, humidity and extra people, people were trying all the postures, very few times were people sitting out, which is really impressive.

Being in the front and not wanting to disappoint Karen made me try even harder today. I know, it is about me and that statement didn't say I didn't want to disappoint myself. But I wasn't planning on being disappointed, my goal was to stay in the room and do the best I could, I didn't really want to be on the front row! I haven't been practicing consistently so my postures are not as polished as they once were. Today though, I pushed myself to a full 100% if not more and did all the postures. Today might be the first day to a renewed practice.

While I was in the room today, I was thinking about the meditation contest from NamasteBookClub, trying to think about not thinking. From time to time my mind would wander and then I would hear Karen or see someone else and my mind would refocus, almost like when my eyes get blurring and refocus. My mind was blury and then sometime would make it very clear and I would be in the moment again, thinking. I think that is meditation, being in the moment but having the mind a little cloudy. I'm going to try that later today. 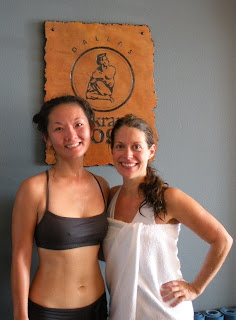 Karen and I AFTER class, all sweaty!
(I'm the one on the left.)
Posted by BikeRunYoga at 12:56 PM