I Completed My Own Triathlon - Run Yoga Yoga

Yesterday I completed my own version of a triathlon, it was hard, amazing, exhausting and motivating. In the morning I ran the Dallas Tour Des Fleurs 10K around . I then went and took the regular Bikram Yoga class and stayed for the Advanced class; that is basically 3 ½ hours of hot yoga! Run Yoga Yoga – That’s my tri. 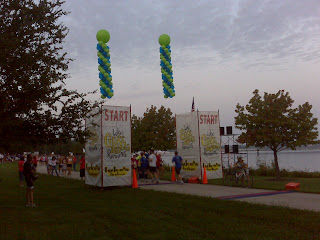 Running the Tour Des Fleurs was fun, if running can even be described as fun. I didn’t really trained to run the race, not for any particular reason except I have been going to yoga more which leaves less time to run. I ran 2 ½ miles the day before to get ready and that seemed more difficult than it should considering I was about to run 6.2 the next day.

The starting area was a bit crazy, there were volunteers holding up time marker signs so people could line up according to their pace, I was in the last group “10:00 minutes and up”.  That’s ok I thought, you might not be fast but at least you got up and made it.

It was close to the start time and everyone started to scoot forward. As I stood there I overheard a group’s conversation. One of them men obviously was going to seminary school, he said to the group “God willing, we will end up right were we need to be.” Then he said, “The key is broad generalities.” This made me laugh a little because that is what makes fortunes and religious quote so accurate, they are broad generalities that can apply to many situations. Not that they aren’t true, but take this guys first quote, of course we will end up where we need to be! As I twittered his comment I saw the crowd moving forward faster…and then we were off to a slow job… then we were off and running!

I ran a fairly good pace for me; I was running about an 11:30 – 12:00 minute mile. I should explain though, I run intervals so I run 5 minutes and walk 1 minute, it averages to just under 12 minute miles. Not bad for a beginner.

As I rounded the last curve and saw the finish line, my only thought was “you can do this.” I repeated this to myself the last ¼ of a mile. As I ran towards the finish line and sprinted in, my chant got louder and faster…I ran as fast and as hard as I could, and then it was done. I had crossed the finish line! The time of the finish clock was 1:16:something and I estimated at least 2 minutes were from where I started to the start line so all in all, I ran just under 12 minute miles.

My shirt, shorts and socks were soaked with sweat. I took my shirt off and rung it out, sweat was still streaming down my body, no need to put THAT back on! I looked at my phone to check the time, I had just enough time to shower and head to yoga.

I made it through all the postures and managed to maintain some sense of good posture through the standing series. Savasana was of course spectacular. The floor series was as good as good could have been expected. I mean really, I had just run 6.2 miles.

Two down, one more to go – Advanced Class 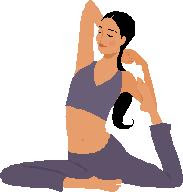 The advanced class is noting to sneeze at. It is still in a heated room albeit slightly cooler than regular class, it is still over 100 degrees. The class goes through all 84 asana postures and in a much faster pace than regular class, plus, it is two hours or more. This after running 6.2 and taking regular class was a true struggle. I made it but it wasn’t exactly pretty.

Why do it then? It is great for preparing yourself for the yoga competition. The yoga competition has 5 compulsory postures and two optional, advanced postures. It is up to the competitor to find the two optional postures, which is done through the advanced class. It is also just a wonderful way to expand ones practice and go beyond the basic Bikram Yoga postures.

A little more than half was through the class I was physically done. My mind had taken over and all kinds of things made me want to run from the room. My mouth felt hot, I felt like I just wanted to breathe in cool air for a moment. My skin itched, my head hurt, my joints were starting to crack, you name it, it bothered me. It was a true mental challenge to ignore all of that and stay in the room. I needed to stay so I could see all the postures, the last time I took the advanced class was well over a year ago so a refresher on the postures and what I might do for competition was greatly needed.

As class wound down and we went into final Savasana, I suddenly felt desperately hungry. I laid there as long as I could, allowing my body to soak in all it had done.

What an amazing sense of accomplishment. I had just run 6.2 mile, take 90 minutes of regular Bikram Yoga and 2 hours of Advanced Bikram Yoga. That is a true tri, that’s my tri.

Posted by BikeRunYoga at 9:26 AM