Fire in Oak Hill near Y was a little too close to home, literally 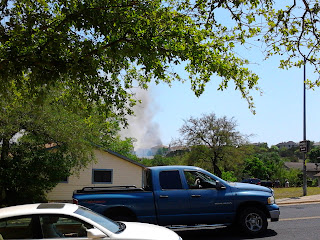 I just returned from a weekend in Austin. I had intended to leave Austin nearly 10 hours ago and as I opened the door of the house my mom and I both noticed a huge amounts of smoke, the smell of wood burning and a bazillion sirens going off. Cars were stopped on the hill, some blocking our driveway, others just trying to get by; as it turns out they had evacuated Callbram Lane. Emergency vehicles of all kinds were rushing by.

As the hours went on more even fire trucks came. I saw trucks from Westlake, Oak hill, Lake Travis and Austin. It was a crazy and awesome sight to see everyone working together. Smoke was everywhere and ash was falling like snow flurries. 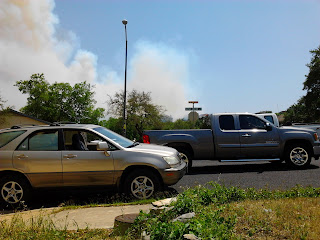 We got the voluntary evacuation notices and started to pack things up; computers, important documents, clothes, etc. We waited though, it seemed the fire had moved farther down the hill and over and our area was clearing up. It was unpredictable though, the wind was fierce, making it difficult for fire fighters to contain the fire. This is about the time the news picked it up, because the fire was close to the Pinnacle where ACC has a campus.
Just as we were calling my dad to tell him things were ok and we were staying in the house, the power went out. Ok, NOT, staying in the house. lol
A fire fighter soon came to the house and said we should get inside because they were bringing large planes in to drop water and he didn't want us to get hurt. He said we could leave but we would need to hurry, before the planes started dropping water. So we gathered everything up and headed out. We are all safe, thank goodness!
The Austin American Statesman has a nice updated report on the fire and where it stands. At the moment there are several streets that have been evacuated and homeowners are not allowed to go back until tomorrow at the earliest. About 10 homes were destroyed and more were damaged. Read the story and updates here.

What to help those that were effected? There is a wonderful, Texas based, non profit organization that gives help to homeowners that have been impacted my natural disasters, Associa Cares. If you know someone that lost their home or their home was severely damaged, please contact Associa Cares and submit a request for financial or other assistance.
And finally, before  I hit the showers and wash off the grime and smoke stench,  I just have to say thank you to all the fire fighters, police and other emergency response people throughout the Greater Austin area for doing such a wonderful job keeping everyone safe today.
Posted by BikeRunYoga at 10:06 PM