Sweat it out, literally, during 90 minutes of Bikram Yoga

You aren't necessarily what you eat but you do sweat it out! 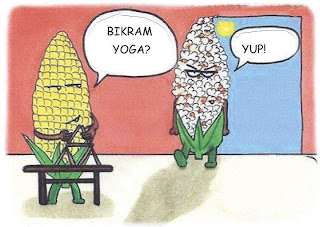 This image was floating around facebook a few weeks ago, not sure who created it but I thought of it today as I sweated through class today. A little background.

I belong to a co-op food share and have been trying to eat more vegetables, less meat and less carbs. Last week they gave me three ears of corn, among other things. As the week went on, there they sat, getting older and dry around the corn shuck.

I decided to boil some water and cook all three, then cut the corn off the cob and save it, thinking of the corn at Velvet Taco...was hoping I could mimic their yummy taste.

After cutting the corn off all three cobs, I had quite a bit of corn. I put some in a bowl seasoned with butter, a bit of cheese and chili powder. It wasn't Velvet Taco corn but it was pretty good. So good that I had two helpings.

Then the next day I finished off the corn and the stewed okra I had made...also with the items from the food share.

Then I took class today. As I stood there after Eagle pose I noticed a scent that seemed so familiar, corn! My first thought, goodness, can Leanne smell me?! Second thought...this must be how the corn felt in that picture on facebook!

I thought it was just in my head but as we ended the standing series and went into Savasana, I distinctly smelled corn! Smelling my sweat in the towel when on the belly it was even more obvious it was corn. I was sweating out corn! You really DO sweat out what you eat! At least I sweat it out and it didn't cook in my stomach or worse colon and start popping!

Note to self, eat more cucumber...less volatile vegetable.
Posted by BikeRunYoga at 9:53 PM