Just Staying in the Yoga Room is Sometimes Enough 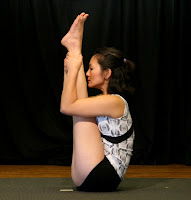 I made it to Bikram Yoga today, a big feat considering my last few days. I am in my recovery week, gearing up for the Hotter N Hell century ride this weekend so I'm suppose to be taking it easy anyway but circumstances have thrown me for a loop recently. After having a bad ride on Sunday that got cut short after a lady yelling at me on the trails and feeling under the weather on Monday and earlier today, I managed to pull myself together enough to go to yoga. I'm glad I did, even if it wasn't the best class I ever had.

Class started off well, the first three poses were pretty solid. I started to feel nauseous during balancing stick, not a nauseous like I'm going to throw up, but a nauseous like my stomach was going to be "sour" the entire class. And I was sweating more than usual and that kind of worried me. So I took it a bit easier over the next few postures and made it to the floor series.

The spine strengthing series though, is all tummy down and that was putting excessive pressure on my stomach, only making it worse! I battled through that, did half tortoise and skipped camel. I know...you aren't suppose to skip a pose. But in my defense, I was already in a comprised state. No sense pushing the envelop.

I stayed in the room and finished class so I consider that a win and a decent class. Not a great class but a decent one. A few things probably can be attributed to my class performance. One, I haven't been eating well. This happens when my life gets a little crazy, either I forget to eat or I just don't want to eat. Neither is good for having a good yoga class. Two, I wasn't in a good mental state. I was hoping going to yoga would clear my mind and give me some mental peace but I have a hard time focusing sometimes and my brain gets in the way of my soul cleansing.

Even so, I made it to class, I gave it all I could and I stayed in the room. Like I said, I am considering that a win. Tomorrow is a new day, a chance to start over and be better. Perhaps a better me is just a Bikram class away.

Namaste
Posted by BikeRunYoga at 9:45 PM